They say imitation is the most sincere form of flattery, but netizens are certain Wizkid won’t be flattered by Burna Boy’s latest tweet.

The 30-year-old Grammy winner took to Twitter to share an inspiring story of how he sold-out concert venues in 2018. According to Burna Boy, he effortlessly sold out those places without breaking a sweat and his shows were ‘amazing’. He also revealed that as a big performer now, he plans on selling out Arenas, Stadiums, and Festivals in the future.

This might be considered an innocent tweet if it didn’t come days after Wizkid shared on Instagram that he sold out the Prospect Park Brooklyn in New York for his Made in Lagos Tour. Recall that Wizkid announced his concert dates and has diligently been updating fans on the progress of the tour ever since.

RELATED POST  Wizkid’s NO STRESS Splashed On Billboards In California

After Burna Boy’s tweet surfaced online, it was hard to miss the subtle shade being thrown at Big Wiz. Wizkid FC interpreted the tweet as a negative effect of the ‘Copycat syndrome on Burna boy’s part, While others are certain Burna Boy implied Wizkid is still a learner in the ‘Fully Sold’ business. 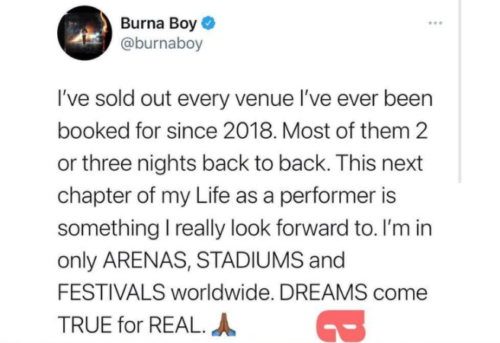 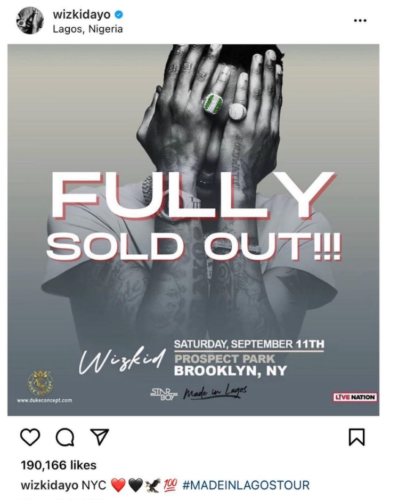 What Do You Think?

Davido and Tiwa Savage To Perform At MOBO Awards 2020