Nigerian superstar, Davido is the latest celebrity to perform MLS club, Atlanta United’s pre-match ritual, becoming the first African artist to do so.

Davido was invited to “hit the golden spike“, a ritual which is done before games held at the Mercedez Benz Stadium by MLS team Atlanta United. Davido hit the golden spike before the club’s game versus Columbus Crew which they narrowly lost 1-0.

Atlanta United shared a video of Davido performing their pre-game ritual via their Twitter page and wrote, “Atlanta born. Nigeria Made 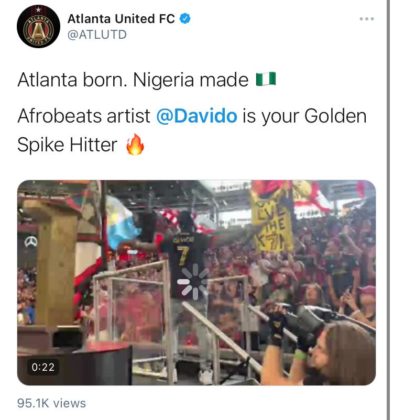 Davido performing the pre-game ritual for Atlanta United seems only right for the city he spent most of his life in. The singer who is also an American citizen grew up in Atlanta and even went to school there before returning to Nigeria to kickstart his career. The DMW boss has a house for himself in Atlanta and goes there mostly whenever he’s in the States. Last month, the afrobeats superstar went with Jamaican singer, Konshens to shoot a video for their new video, Boom Bang in Atlanta.

Just recently, he retired to his house in Atlanta for a brief spell after the loss of his friend and associate, Obama DMW. Until his death last month, Obama was a close friend of the singer and has been with him for many years.