Mavin Records/Jonzing World singer, Rema has revealed the title of his debut album will be ‘Rave and Roses’, also announcing 200 million streams on Spotify.

The singer revealed this via his Twitter page on Thursday, the 1st of June 2021. Rema shared a tweet on his page announcing the title of his very first album. He simply wrote on his page, “Album – Rave & Roses“.

Shortly after announcing the title of his debut album, Rema also revealed that he has amassed 200 million streams on his Spotify page without dropping a project. He wrote;

Just did 200 Million streams on @Spotify without an Album, I’m spoiling myself today cause I deserve it. 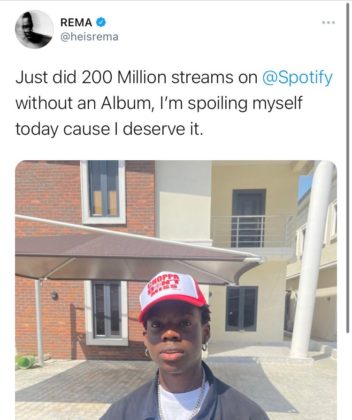 Fans have been anticipating Rema’s debut album, ever since he dropped his first self-titled EP in 2019. Since his entry, he has grown even stronger and stronger and was even named on Forbes Africa 30 under 30 list alongside South Africa’s Master KG.

Tiwa Savage, Tekno and More Make the Tracklist of Coming to America 2