Big Wiz has finally replied to Seun Kuti following the insults his fan club dished out to Seun after he shared photos of his Grammy Plaque.

We earlier reported that Seun Kuti took to social media to admit defeat after Wizkid’s FC dragged and insulted his music career. This is coming weeks after Seun Kuti insulted their fave, Wizkid who according to him didn’t win a Grammy cause’ he was a featured artist.

Reacting to the Grammy saga, Wizkid took to IG to appeal to Seun Kuti in the comment section of his defeat acceptance post. He pleaded with him to ignore his fans and focus on his music.

Throwing a direct shade at Seun Kuti, he advised him to get his Saxophone and make new music for them. According to Big Wiz, they enjoyed the last album he dropped in 2018 (Black Times) and they are still dancing to it. 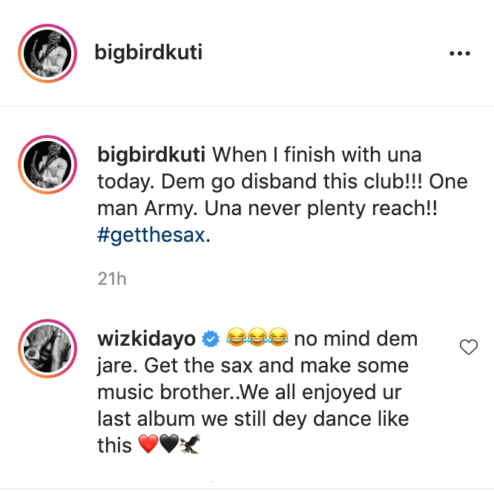 With his reply, Wizkid implied that Seun Kuti should use the energy he’s using to trade insults with his fan club to drop a new album.