Wizkid and Tems’ global hit song, Essence has broken yet another record, becoming the first African song to enter the US Apple Music top 10.

Essence has been on the US Apple Music top 50 for a few weeks and the song is getting such widespread acceptance that it is now into the top 10. The new milestone for Essence was announced via the singer’s official fan page, @wizkidnews on Saturday, the 31st of July 2021.

Breaking into the Top 10 has been long expected for Essence as the song that has now been dubbed “song of the summer“. It has been on rotation at almost every party and has broken many records. Wizkid’s fan page on Instagram shared a screenshot of the US Apple Music top 10 chart with Essence sitting pretty at n0. 9 and wrote;

“Essence” is officially in the Top 10 on the US Apple Music chart. It’s the first African song to do this and the highest-charting one. #MadeinLagos 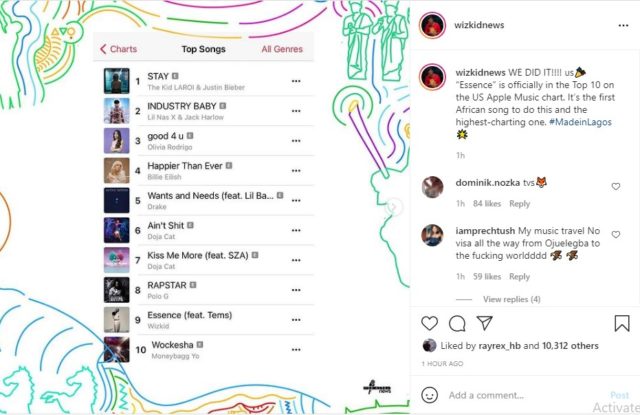 Ever since the turn of the year, it has been milestone after milestone for Wizkid and Tems for their collaboration, Essence. The song is sitting well into the Billboard Hot 100 Chart and was put on the list for Billboard’s top 50 songs of the year so far.